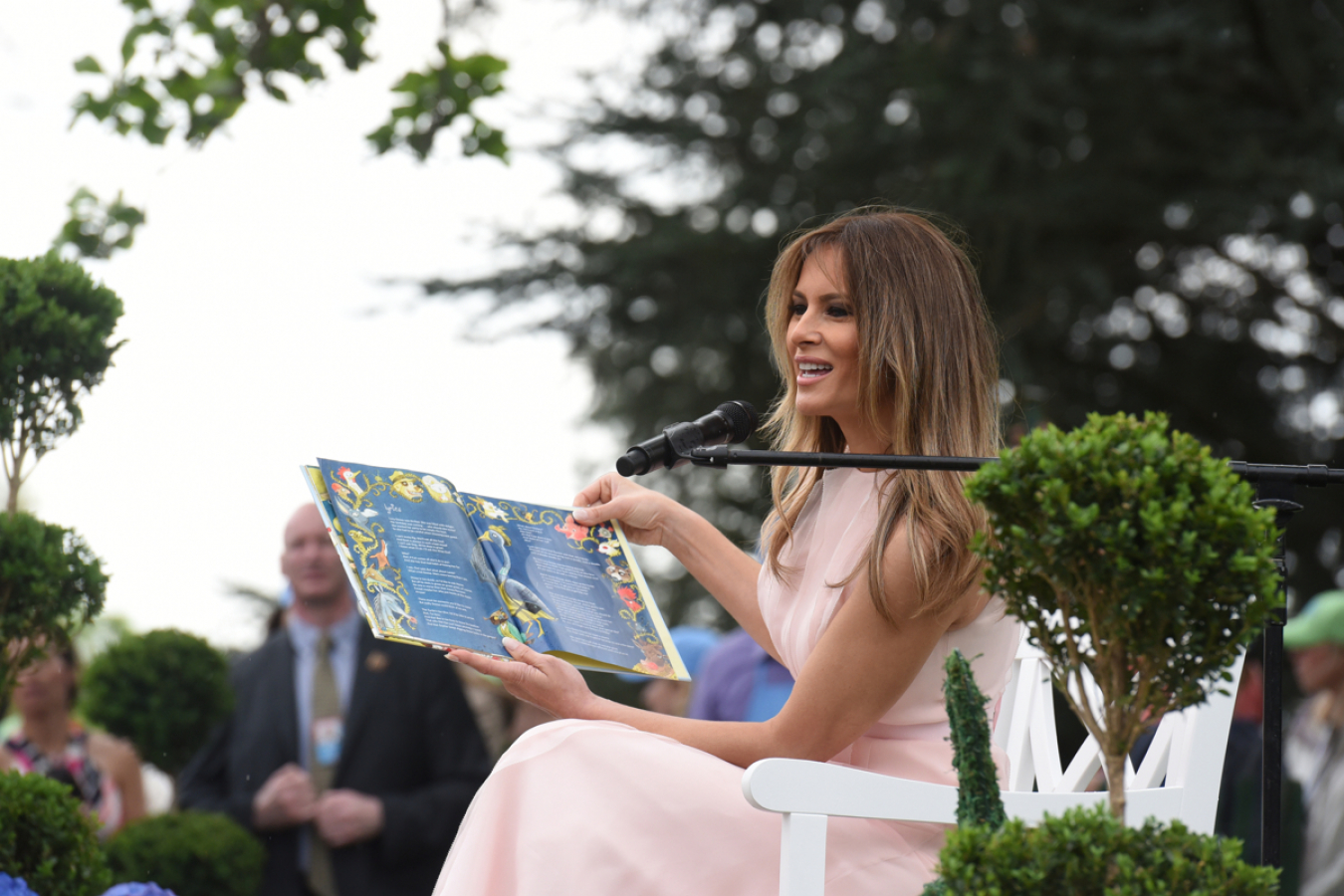 Donald Trump is a typical American in many ways and is of immigrant stock.   His father is of German ancestry and his mother of Scottish ancestry.   His wives have all been immigrants including his latest wife Melania Trump.  Somewhat bizarrely Donald Trump in April 2019 stated that his father was born in Germany.  In fact his father Fred Trump was born in New York.   Trump’s grandfather Friedrich Trump a barber was born in Germany and arrived in the US when he was sixteen.  His mother Mary Anne Macleod was born into a poverty-stricken family in Lewis in Scotland.

Despite all the speculation there seems to be no real evidence that Melania Trump did anything wrong when applying for her “Green Card”.   She obtained an EB1 Extraordinary Ability visa.  There is an interesting somewhat sympathetic interview in Nightline on ABC with Melania Trump.

Amid accusations of a lack of transparency about her immigration journey, an explosive new book exposes the First Lady’s path to securing the so-called, US ‘Einstein visa’. Despite being the wife of Trump, who continues to make life harder for immigrants to enter the US, Melania Trump has never fully disclosed her own journey as an immigrant.

According to Mary Jordan, author of the book “The Art of Her Deal: The Untold Story of Melania Trump,” the lack of transparency has fuelled speculation over how Melania Trump (formerly Knauss) gained a “Green Card”.

Jordan, who is a Pulitzer Prize-winning Washington Post political reporter, acknowledged that Trump’s strict immigration policies have served to reduce the number of people entering the US. According to official figures, migrant numbers to the US had dropped by 70% in 2018, compared to the previous year.

Despite widely publicising and bragging about his polices that restrict US immigration, Trump and the First Lady have never disclosed public records about Melania’s immigration to the US, which includes a lack of information about how she was granted the so-called, ‘Einstein visa’ in 2001.

Mrs Trump became a US citizen in 2006, after marrying Trump in 2005 and giving birth to their son, Barron.

Amid Trump’s presidential election campaign, a promise was made to hold a press conference in August 2016 to clarify Melania’s path to lawful US permanent residency and citizenship.

An agreement to hold a press conference was made after nude photos of the First Lady were splashed across the front and inside pages of the New York Post.

During a rally in North Carolina on his way to becoming US President, Trump said: “They said my wife Melania might have come in illegally. Can you believe that one?”

The promised press conference never took place and Melania’s immigration records have never been made public.

Jordan has spoken to attorney Michael Wildes for clarification on Melania’s secretive immigration history. Wildes has been designated by the Trumps to answer questions about the First Lady’s entry into the US, even though he had nothing to do with her original US visa and green card applications.

According to Wildes, Melania Knauss arrived in the US – New York City to be precise – in August 1996 to pursue a modeling career. Two months after her arrival, she was granted an H1B visa, allowing her to work in the US for 12 months. Over the next five years, she was able to renew her H1B visa five times.

In March 2001, Melania was granted an ‘Einstein visa, issued through the ‘elite’ EB1 program. Jordan states that back in 2001, such a visa was granted to just 1% of non-US citizens and only to those deemed to have ‘extraordinary ability’, including renowned academics, multi-national business executives, Olympic athletes and Oscar-winning actors.

Modeling career in the US

It’s unknown what Melania disclosed about her modeling career as part of her US green card application that demonstrated ‘extraordinary ability.’

According to Jordan, Melania was never noticed by ‘editorial’ models - who are known to book top-level modeling gigs with the likes of Vogue, Harper’s Bazaar, or Marie Claire – before or after she started dating Trump sometime in 1998.

Matthew Atanian, a photographer and Melania’s roommate during her days struggling to make it as a model, told Jordan that the First Lady was a ‘commercial’ model at best. Atanian said: “As a commercial model, Melania would never be considered a supermodel like her idols Paulina Porizkova, Claudia Schiffer or Linda Evangelista.”

Nevertheless, Trump would often introduce Melania as a supermodel when they first got together. Meanwhile, her relationship with Trump did land her some more high-profile modeling work, according to Jordan’s book. By the year 2000, Melania’s major modeling achievements included an ad for Camel cigarettes.

That campaign saw Melania splashed across a billboard on Times Square and a photo in the Sports Illustrated swimsuit edition.

However, when speaking to Wildes, Jordan questioned whether her modeling accomplishments amounted to ‘extraordinary ability’. Wildes’ reply was “There is no reason to adjudicate her petition publicly when her privacy is so important to her.”

A number of immigration attorneys disagree with Wildes’ point of view, arguing that as the wife of a President whose US immigration rhetoric demonizes immigrants arriving in the US illegally, Melania should be accountable and disclose the details behind her entry into the US.

Money for modeling gigs before getting visa

In her book, Jordan also refers to a report in the Associated Press published a few days prior to the 2016 presidential election, which stated that Melania received up to $20,000 for 10 modeling gigs undertaken before receiving her US work visa in 1996.

David Leopold, a former president of the American Immigration Lawyers Association, told Jordan: “There are a lot of questions about how she procured entry into the United States.”

Amid questions surrounding Melania’s US immigration journey, there’s also speculation as to how she was able to help secure US citizenship for her parents, Viktor and Amalija Knauss.

Trump has long blasted chain migration. Jordan refers to a rally on August 4, 2018 when the President stoked the crowd saying: “How about chain migration? How about that?” His comments sparked jeering from his supporters.

Just five days after the rally, Melania’s parents were celebrating their naturalization ceremony at a federal building in Manhattan.

Wildes claims that the First Lady’s parents were not given special treatment when it came to their US citizenship application and the review process.

Jordan’s book states: “Melania began working with an immigration lawyer in 2006 to begin the process of “chain migration” for both her parents and her sister. But it was only after Trump became President that Melania’s parents joined her as naturalized US citizens and her sister became a permanent legal resident.

Just a day after Melania’s parents became citizens, during an interview with CNN, Wildes spoke out on being in favor of family reunification. He apparently told Jordan that the First Lady had him instructed him before the interview to ‘make it clear that she needed someone to babysit her son.’

Melania wanted to make sure that her son was in the hands of her parents and that they had the right to be in the US permanently so she could ‘do the work of the nation’, Jordan wrote. 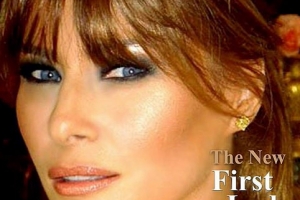 Comments (0)
Melania Trump is embroiled in controversy after it emerged that she was granted a green card in the elite EB-1 employment based immigrant program – reserved for renowned academics, multinational...

Trump extends restrictions on immigration and US work visas

Comments (0)
Comments by Sanwar Ali : The Trump work visa ban has been highly controversial, with a number of legal challenges against the ban. On 1 st October a judge ruled that visa processing could start again... 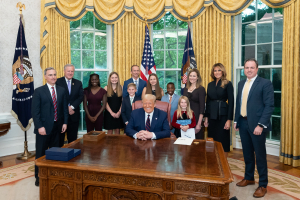