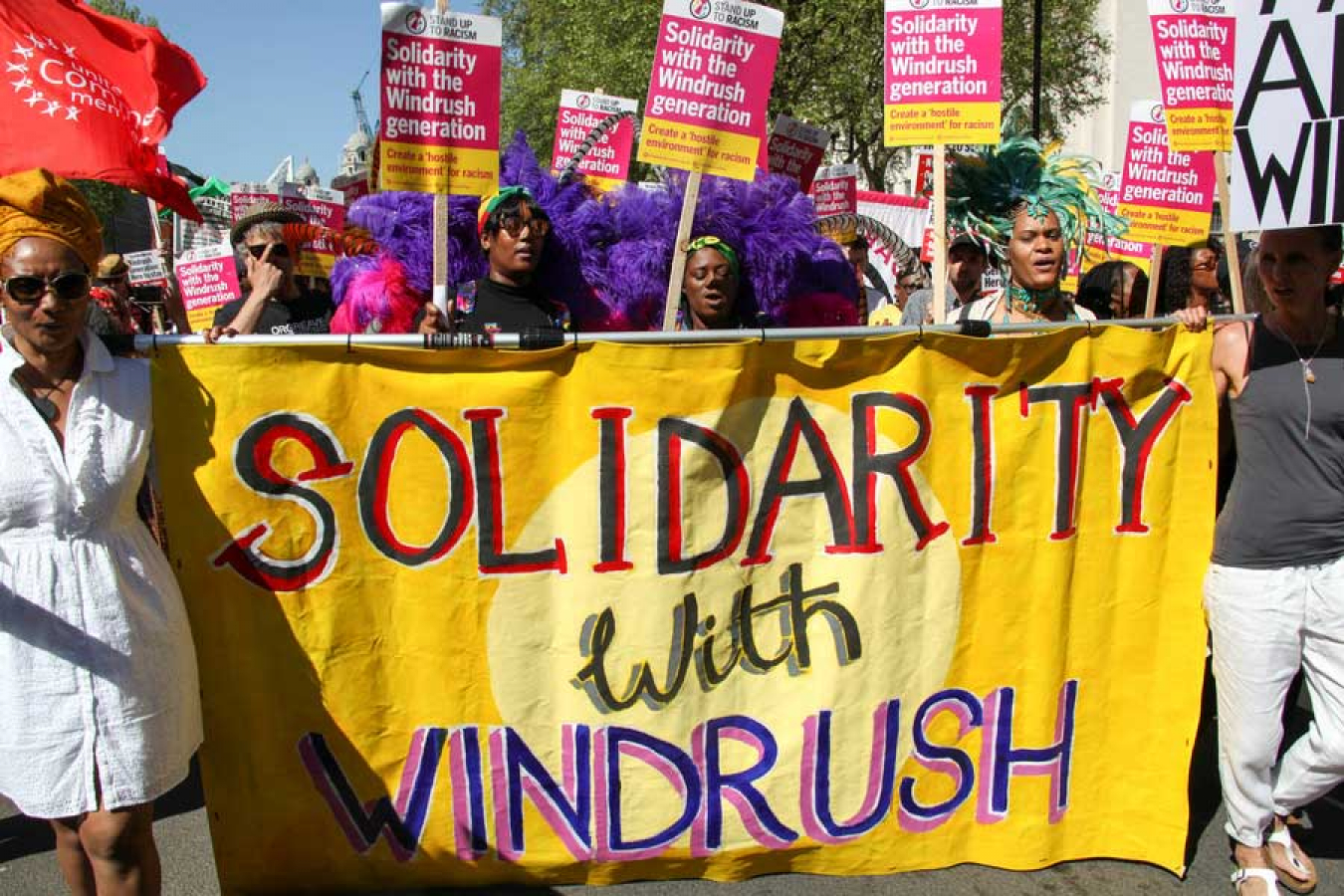 People can be excused for being extremely cynical about the apparent change of heart by the Home Office.  Action by the Government has been somewhat lacking.  The “hostile environment” policy has affected other BAME (Black, Asian and minority ethnic) minorities as well as the Windrush generation.  The Government Legal Department which acts on behalf of the Home Office and those sponsored by the Home Office, have we believe also become part of the hostile environment policy.  As part of the State apparatus we believe they can be harsh and unjust.  Large sums of money continue to be spent to defend the State and organisations linked to the State from discrimination claims.

People are scared of talking out.  One barrister and best selling author known as the “Secret Barrister” decides to keep his identity a secret.  He (or she?) is scared that it will affect his work as a barrister if his true identity is known.  The Secret Barrister exposes discrimination and serious problems with the legal justice system in the UK.  Many people from BAME minority groups do not believe that they will be treated fairly by the Justice system.  The hostile environment policy makes the situation worse.

UK Home Secretary, Priti Patel, has promised to reform the Home Office so that it is more ‘compassionate’. Ms Patel’s promise comes following a damning review of the Windrush scandal, which made 30 recommendations that the government has pledged to act on. The Home Secretary has now shared details of a five-point plan to implement the change.

In the wake of the Windrush scandal, Priti Patel said that she wants to revolutionise the culture of the Home Office and adopt a ‘people first’ approach to UK immigration following the independent ‘Lessons Learned’ review. However, while Labour welcomed Patel’s promises, they added that the government lacks credibility on the issue.

Labour also questioned why the victims of wrongful UK immigration enforcement are being compensated at a ‘slow pace’. When questioned by Shadow Home Secretary, Nick Thomas-Symonds over compensation payments, Patel said: “The Windrush compensation scheme has received 1,342 applications so far.”

“Offers of payment have been made to 154 people or approximately 11%,” the Home Secretary added. However, Patel did not disclose how many people had received a payment.

Only 60 payments made to Windrush victims

According to the latest Home Office figures, from May, of the 1,275 applications that had been received at that point, just 60 payments had been made, representing 4.7% of the total. This was a slight increase on data for February, which showed that in the first 10 months of the scheme, just 36 applicants (3%) had received their money.

Introduced in 2012 by former Prime Minister, Theresa May, the policy has reportedly been rebranded as the ‘compliant environment’.

In response to the independent review, authored by Wendy Williams, Priti Patel said: “What happened to the Windrush generation is unspeakable, and no one with a legal right to be here should ever have been penalised.”

“I’ve tasked my officials to undertake a full evaluation of the compliant environment policy and measures, individually and cumulatively, to make sure the crucial balance is right,” the Home Secretary added.

The 276-page Lessons Learned review into the Windrush scandal, which misclassified thousands of residents with legal status in the UK who had arrived in the country from Commonwealth countries and lived in Britain for decades, as illegal immigrants found evidence of ‘ignorance and institutional thoughtlessness’ on the subject of race.

The report concluded that the Home Office had a culture that was consistent with institutional racism.

Wendy Williams, who is a solicitor and one of the Inspectors of the Constabulary, reported that the Home Office was ‘characterised by a culture of disbelief and carelessness’, while displaying a lack of empathy for people.

Patel first responded to Ms Williams’ review in June, saying that she accepted all 30 recommendations made in the report and would come up with a plan to implement changes.

At Westminster on 22 July, Patel told MPs: “My ambition is for a fair, humane, compassionate and outward-looking Home Office, that represents people from every corner of our diverse society.

“This will ensure sweeping reforms to our culture, policies, systems and working practices to reach across the entire department, an approach that Wendy Williams has welcomed.”

Community involvement to deal with issues of discrimination

As part of implementing the recommendations made in the review, Patel said there are plans to involve community groups, saying: “I have been clear to my officials that this is not a box-ticking exercise. A delivery plan has been drawn up to ensure meaningful and rapid action.”

Patel told MPs that she is targeting five key areas for change, in what she described as a ‘genuine shift in culture within the Home Office.’ Patel is aiming for:

• Compulsory training and education for Home Office staff on the history of migration and race in the UK.

• A more inclusive workforce, with a higher proportion of BAME staff in senior roles.

• Making the Home Office more open to scrutiny and ensuring it better engages with others.

• A commitment to inclusive policymaking, with impact assessments about how changes could affect vulnerable individuals or communities.

• A more compassionate approach, based on “people, not cases”.

It’s understood that Wendy Williams will review progress made on implementing her recommendations in September 2021.

The Home Secretary said: “The injustices of Windrush did not happen because Home Office staff were bad people, but because staff themselves were caught up in a system where they did not feel they had the permission to bring personal judgment to bear.”

Thomas-Symonds detailed some of the experiences of Windrush victims in claiming compensation. He said: “It’s all the more shocking that just 60 people have received compensation from the Windrush compensation scheme in the first year of operation.”

“Ministers must get a grip of this scheme. The review is clear that the Home Office must be more proactive in identifying people affected and putting right any detriment detected,” Thomas-Symonds added.

The Shadow Home Secretary also urged Patel to disclose more information on a government review into its hostile environment policy, and when it would be completed.

Thomas-Symonds said that he still has concerns over the Home Office’s pace of change, saying: “The Black Lives Matter movement highlighted the need not just to recognise the discrimination and racism that black people continue to face, but to demand action.

“Looking at the failure to act on so many previous reviews, the government is falling woefully short on that action.”

Labour MP, Yvette Cooper, who chairs the Commons Home Affairs Select Committee, welcomed Ms Patel’s comments, but raised concerns on what she described as ‘massive delays in the compensation process.’ There’s evidence that some Windrush victims have waited more than a year just for acknowledgement that their application has been received.

Cooper said: “We’re hearing case after case where this is happening. Could she [Patel] now urgently review the operation of the compensation scheme so that initial payments can be made far, far more quickly? This is an ageing generation – it is urgent that they get support.”

Patel responded by saying that she would ‘look into individual cases’ brought to her attention by Ms Cooper.

Comments (0)
Comments by Sanwar Ali : The new UK healthcare visa scheme is another disappointment. The system will not allow entry of frontline care workers. Such people will not have high enough skills to come...

Comments (0)
Comments by Sanwar Ali : There are few surprises in the announcement today about the new UK visa points system. It seems that, as expected, the new UK visa system will be unable to deal with post-...